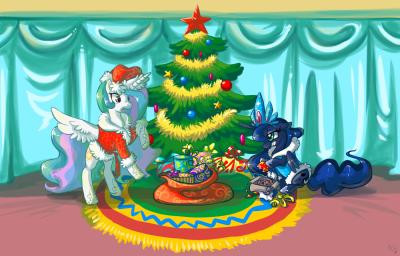 So, today is December 31st, 2014. It's time to summarize everything I've done during the year of horse. Thankfully, I kept most of the important events in this blog.

First (according to this blog, because I have terrible memory), I started sharing my code. The first script I shared was to “rip” music from Google Music Android app. Mostly I shared my SlackBuilds. Later this year I set up a git repo, and near the end of the year I finally made a GitHub account. On GitHub I contributed to Tomb project: I made a Russian translation, fixed a bug and reported a few others.

Besides my (poor) coding skills I also contributed a bit to the Slackware community via the “officially unofficial” forum. I even got aknowledged by Patrick Volkerding himself, which I never expected.

I asked for a few commissions in the course of the year. A big number of them are by DZAladan: Twilight wants some…, Kinky Cherry, Sweet Luna on a bicycle!, Changeling Dakimakura and even my updated avatar which I didn't ask for.

Second place by my requests holds Nix. Commissions by her: Luna with minigun, Birthday Derpy Hooves (wasn't a commission, just a surprise present) and this post's New Year themed picture.

There was one commission by vavacung: Changeling in a swimsuit.

Also my question for Pun Pony was finally answered only a year later.

And apparently I also made a couple of vectors myself: Cheerleader Blossomforth and Changeling Cheerleader. And it felt like so long ago…

Oh, I wasted a lot of money this year. Maybe not as much as I have in 2012 when I just got a credit card, but definitely close to that.

First, I had been donating. Every month. Mostly it was for one person, but I also donated to one or two other people and bought a few things during Markiplier's charity livestreams.

Second, my biggest waste this year: cello. A truly beautiful instrument which, unfortunately, I had to sell a couple of months later. I learned a few things while trying to play it, and it's a very valuable experience, but I don't think I'll ever be able to play on it…

Third, no-so-waste: a bicycle. I rode it two times during this year and it has been standing in the storehouse which I have to pay for. At least I know how to ride it, I just need to buy some more equipment in order to efficiently ride in in a city, like a helmet. And I need a friend to ride with…

Dakimakura. A commission drawn by DZAladan that acquired a body. The pillowcase alone costed full price for some reason. That reason was revealed when my order arrived: they included a pillow insert… Luckily, I found space for it, so now I have a spare one. And I also bought a pillow insert for DZAladan, so he could cuddle with Twilight dakimakura I sent him.

There were a few other things I bought which are not that big: lunchbox (which I've used for about two or three weeks), The Journal of the Two Sisters, Funko Twilight figurine (don't have a photo of it; had to pay double for the shipping due to the package being lost), The Daring Do Adventure Collection, Pony Plot Book and MLP"FiM S4 DVD.

There was ONE thing I bought that wasn't a waste: MSI CX61 2OD-062 laptop. I've been using it instead of my desktop PC since I bought it and I'm pretty happy with it.

Buying a lot of games in Steam aside, there are two games that got me addicted more or less this year: Minecraft and good old Ragnarok Online.

I deliberately neglected Minecraft for years. This year I finally decided to try it. It took me a week or two, but I started to enjoy this game, especially when I was playing with friends. I even bought a Minecraft server (not a realm, though). More than that, playing Minecraft was pretty much the only time I interacted with DZAladan. There were a few more interactions with him, but mostly we spent time in Minecraft. Too bad he wasn't a frequent visitor.

A month ago I received an email saying that a nostalgic Ragnarok Online server was about to open. That interested me and I decided to give this game yet another try. And it was pretty fun. For the first time I was playing a support character. I finally started to level in parties. And it got even more fun then I joined a just-for-fun guild. I wonder how much time will I spend on RO this time…

That's pretty much everything I can remember now. It was a good year, with its ups and downs. I hope the next one will be even more interesting.