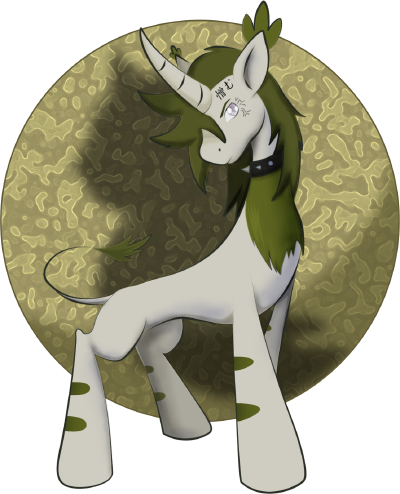 This is a (sort of) ponified version of my avatar drawn by ZiPo. Well, its sketch looked more badass, while the finished version before edits looked more kawaii (and a bit wrong). But I'm more or less satisfied how it turned out in the end. Didn't expect the pony to be so slender, though. I need to lose a few kilos to match him. Also, a horn wasn't supposed to be this big, but ZiPo tends to like it when a pony has a big and thick… horn.

And a version without the moon in the background: Actually, ZiPo wasn't the only one who tried to ponify my avatar. His friend Jim also tried it (they had kind of a contest going on), and the result is pretty good despite only being a rough sketch. It's an interesting idea to have the symbol on a head of the original avatar as a cutie mark. And I originally thought ZiPo was goind to finally finish that ponysona of me he drew a couple of years ago and never finished…. I don't think I can call the result a ponysona (I'm not that cool), but it's definitely an avatar I'd choose.