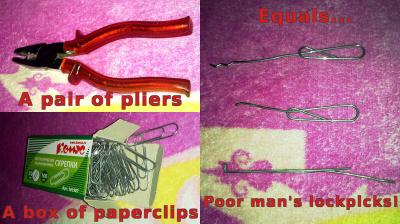 Recently I became interested in lock picking, and for that I blame YouTube. It turned out, picking locks is fun and challenging. It’s like solving a Rubik’s Cube.

I’ve read Mike Gibson’s (DrBint) “Lock Picking: Detail Overkill” and watched a bunch of YouTube videos, so I know the basics of lock picking. Unfortunately, I don’t think there’s a way to get lock picks in my area, and I don’t have neither tools nor knowledge to make a decent pick myself. So I ordered some Chinese set of lock picks, but it’ll arrive (I hope) within 5-6 weeks.

But I desire practice right now! And I decided to use what I do have at my disposal: paperclips. First I made a pick for raking using a serrated 5 cm (~2") paperclip and a tension wrench out of a ~4 cm (~1.5") paperclip. With this I was able to pick the lock on my front door. But the pick was too thick (because of serrations that deformed a paperclip a little) to fit on other locks. So I went to a stationary store and bought a box of 5 cm non-serrated paperclips (4 cm ones would work better, but the store didn’t have them).

With these new paperclips I made: a shorter tension wrench, another rake and a hook (see the picture at the top of the post). With these picks and more knowledge than I had when picking the lock for the first time in my life I was able to once again successfully pick the lock on my front door, and this time it was a success each time, unlike previous experience, when I was able to rake the lock open only half of the time. I also bought a cylinder lock specifically for practicing, although it turned out to be 6 pin lock with rather tense springs and lower than expected tolerance, although I got it very cheap (100₽, ~$1.5) at the locksmith near my work. I think I need to get some easier lock, because I spent a few hours with it and only was able to open it once and on pure luck with zipping. Also my paperclips are too thick for this lock even after I filed them, so it’s difficult to maneuver the picks.

I hope my pick set arrives soon, because paperclips are not the best material for picking locks, especially 6 pin ones: they constantly bend and it’s very difficult to set the 6th pin.

P.S.: I pick locks out of pure interest. It’s like a puzzle for me. I don’t plan to do anything illegal.