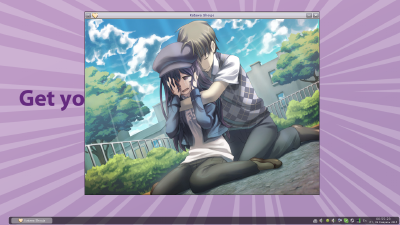 A few days ago I learned about a game called Katawa Shoujo. What appealed to me was a Linux version. I am not into visual novels, in fact this was my first game of such genre, but I decided to give it a try. After all, a bunch of cute disabled girls is a pretty original (albeit probably not new) concept. And I tried…

And I took a lot of time from my sleep in order to complete the game. The story is beautiful, the characters are charming, the music is great, the art is stunning. And to think that this is a fan made game… Although it did take them about five years to release the final version, so a lot of effort was put into making this game.

As you can't tell from the image above (because you most likely don't know about this game), I took Hanako route. Which might be strange, when, drawing a parallel with My Little Pony, she is a lot like Fluttershy, whom I don't really like. But I think Fluttershy was a turn off for me because of her being overly kind and obsessed with animals. Hanako is also as cute as she is shy, the latter is actually even more so. But beside the traits that attract a lot of bronies to Fluttershy, here's what made me choose Hanako instead of Shizune, whom I thought to choose at first: she is a bookworm (like Twilight), she likes computers (even though she doesn't have much experience with them), her scars, which give her charm, and, most importantly, an aura of mystery around her. You can't figure her out until the very end, and even then the main character realizes he doesn't know a lot about her. So by the time her mystery is finally solved I was really attached to her. Her life was pretty harsh and her route in game was really emotion packed. I haven't played other girls’ routes yet, but I'm pretty sure theirs won't match Hanako's.

All in all, it's a great visual novel. It's not really a game, because there's not many choices. It feels much more like an interactive story. I don't even know yet if you can lose in this game. If you can, then I was pretty lucky to make the right choices and finish the story. I definitely recommend it to everyone who enjoys a good read (and there's a lot of reading involved). Be warned, that this game contains adult content, which, however, can be turned off in the settings menu.