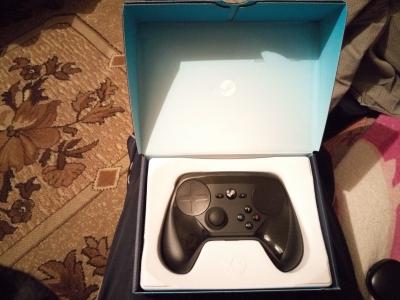 It costed a lot (even though I bought it from Amazon) and it wasn’t easy to get it on time, but I managed to get my hands on it. Actually, I got it this Monday, it was just a pretty busy week so I didn’t really have time to do much at the evenings, besides I wanted to give the controller some test run first before writing about it.

The controller has its ups and downs. I still can’t decide if it’s really good or not. I think I’ll just make a bullet-list of its good and bad sides and then summarize my short experience with it.

I played a few games with it and here’s my experience:

Unlike your traditional gamepads, Steam Controller takes a lot more time to get used to, but its flexibility allows you to play in more ways and in more games. You must use Steam and keep it running in order to configure and use it, but it works (or at least it should) in any game or application which supports keyboard, mouse and gamepad in any combination. So far I thing I like it more than dislike it. I need more time to get used to it. Because the controls can be so much different from each other, it’ll take getting used to to control scheme for every game individually, at least until I’m comfortable with the controller’s layout.

Things I would like to see in the future:

Is this the best controller ever? Probably not. Is it better than controllers for Xbox or PS? In some ways, yes: you can play a wider range of games more comfortably. In some ways, no: it takes a lot of time to get used to and some controls would feel awkward in some games/situations. It’s a neat gadget to have and play with. I think it’s $50 (and $30 for shipping) well spent. I would recommend to give it a try for a week or so before deciding if it’s good or not.