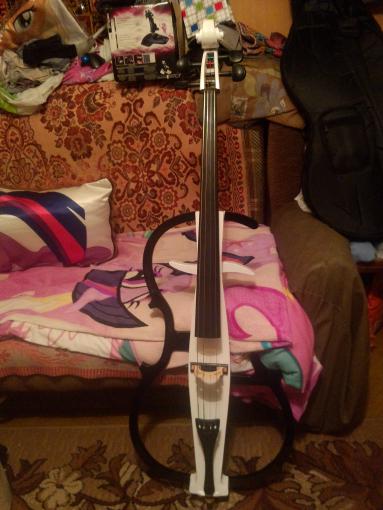 Yup. I don’t have any musical experience whatsoever, but I still bought one. AND IT’S GORGEOUS! What a beautiful instrument…

It all started with, you guessed it if you’re a brony, Octavia. She made me take a notice of a cello. Then I’ve listened to some brony music that involved cello. Then I heard on the radio about electric cello. Yes, I thought there was only electric guitar too. Apparently, there isn’t. So I googled a bit and discovered two incredible musicians, Matthew Shoening and Zoe Keating. Go and buy their music RIGHT NOW!!! The former plays on electric cello, the latter - acoustic one. They both play modern music using modern technology. I’m not saying classical music is bad, but it’s just old. They, however, make a classical instrument sound new and really beautiful. It was them who inspired me to actually learn playing this musical instrument. I mean, I’ve heard some great music, but that was the first time I wanted to play something myself. Long story short, now I’m learning to play a cello.

This is a Yinfente electric cello I bought on eBay for $249 (and $173 for shipping). It’s way too cheap for an electric cello (it usually costs 20 times more), but the quality is surprisingly good. The reviews on the Internet stated that such cellos are playable, which is good enough for me since I just want to learn. So far it’s not going very well, I think I need a tutor to learn the basics. I did find some pretty good video lessons though, but I’ll come to them when I at least learn how to hold the instrument properly.

And so, now I have something to do during long lonely evenings for the next few years.