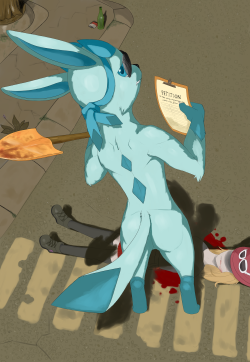 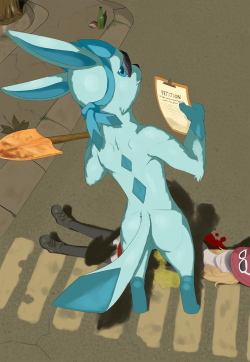 A little while ago I was thinking about possible ideas for commissions. One of them was my pokesona as a Postal Dude, because I love Postal game series. But I didn’t want to commission ZiPo for that, I think his art style wouldn’t fit the theme, even though he likes Postal games as well. Nix was out of the question too, I mean, come on, cute Postal Dude? I needed something more crude. And artists I didn’t know personally wouldn’t be too happy with my lack of a reference sheet. But it so happens that my friend Jim has just the right style.

I told him about the idea and he got very interested. But I warned him that you had to feel the Postal vibe in order to draw something like that, and he had no idea what the game was about. He was still eager to try, so I sent him links to a few videos to get the gist of the series. I also had a rough idea of my sona standing with a bloody shovel and taking a piss (major theme in the game; it’s pretty trash in case you didn’t know, and I love it for that) as an example, and it seems Jim decided to draw just that. And there’s also the infamous petition, because why not?

In the middle of the process he asked me pretty much whom I would like to kill and piss on. And without much thinking I said: Serena from Pokemon XY. Her main character complex and constant meddling with the plot at the pretence of helping the actual main character sucked so much fun from my playthrough of the game’s story that I just hated her. Like, rape her headless corpse hated. That’s why she’s here. Dead. And covered in piss, which is a version not for general public.